The Awakening Of Operative 13 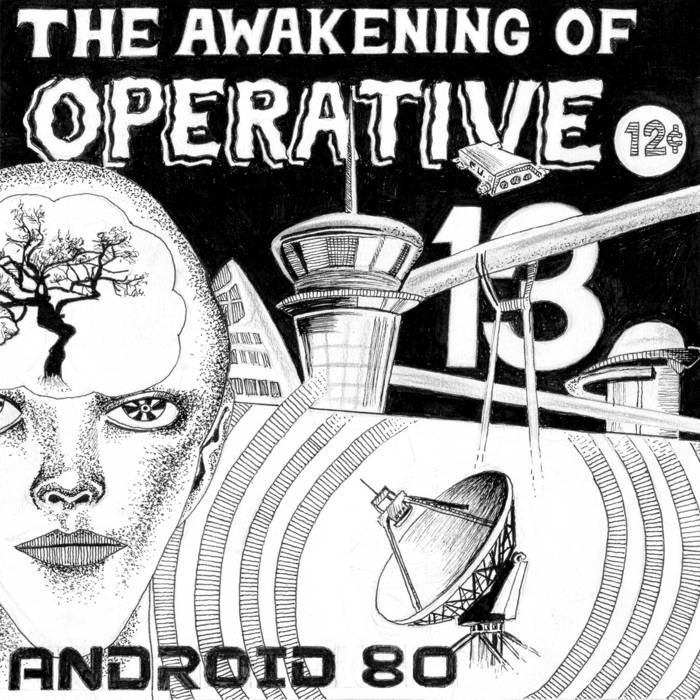 Operative 13 is a servile drone in a giant organism known as The Hive.

All independent thought or free will has been consigned to history, and Nature is something that can only be viewed in archives. During one work period, his mundane repetitive toil is disturbed by a vision of a solitary tree that appears briefly in his mind, bringing with it a strange solace. It then disappears, only to intermittently return. He is perturbed by this unusual occurrence and relieved when his shift is over.

In the Forbidden Sector outside the city boundaries, an unknown person has constructed a Mind Projector, which is transmitting the tree image. The projector is using the image to identify any brain that still contains dormant wave receptors and can therefore receive this frequency. After many fruitless months the seeker finally finds a match.

Operative 13 returns home via the city centre’s hedonism palace, known as Glass Utopia, a shimmering monument to progress and collective subservience, where citizens can avail themselves of all the pleasures known to man, but the vision experience has perturbed him too much to indulge. He saves his credits and returns to his residence pod, where he spends an evening in turmoil, feeling mentally violated.

The tree transmission is also a key, capable of opening up the mind of any compatible recipient, allowing them to receive all the lost knowledge of humankind in an intense controlled blast. The broadcast is sent and the brain on the receiving end is Operative 13’s.

The unusual activity in The Hive has not gone undetected and Operative 13, now an enlightened and highly evolved being, receives a visit from the Brain Police. Despite their intensive scans and probes they are unable to detect any subversive or renegade thought, as Operative 13 has constructed a mental wall. They leave finally without an arrest but far from satisfied.

Escape from The Hive is the only option, and with his enhanced intelligence he navigates the air-vents, sewers and security points, only to find a desolate landscape outside.

Some miles away from the city, Operative 13 encounters the Right Honourable Viscount Spoons, and his manservant Mr. Grumpy, who invite him to stay for afternoon tea from Mr Grumpy’s Magic Teapot, but he must continue to the source of the transmission.

He eventually finds the Tree Transmitter, he finally made it. It is in a makeshift camp with a population of one; a beautiful girl who is the distillation of all his desires, The Girl You Cannot See…and roll credits.

"Blending the future world imagery, no doubt inspired by both Philip K Dick and JG Ballard, with a vintage electronique framing that all once hints of the shadowy macabre of the Human League’s ‘circus of death’, the clinical euro-pop chic of Visage and the brooding noir-tronics of b-movie, ‘violated’ though sounding retro still manages to sonically appear as though it’s posited on some future outpost waiting for time to catch up, a fleeting Foxx-ian visitation star gazed in loop grooved sepia silvered fairground motifs etched in bleak ‘blade runner’ styled dystopia whose nearest bedfellow, it should be said, is would you believe, the more electronic daubed grooves of a certain AB Leonard." marklosingtoday

Bandcamp Daily  your guide to the world of Bandcamp